This is the second part of the series 3D Printing in Sub-Micron Scale. The first part was about a truly nanoscale 3D printing technology realized in a scanning electron microscope. Here we focus on the most commercially successful sub-micron 3D printing technology: Photopolymerization via two-photon absorption aka two photon polymerization (2PP). Before going into any technical details please watch this stunning short video made by TU Wien:

Isn’t this something? Of course 2PP is not only a high-tech toy to build micro-castles or cars. The following list includes just some of the current applications according to Nanoscribe, a manufacturer of 2PP 3D printers:

The printing principle is similar to the commonly used stereolithography. A vat of liquid photopolymer resin is cured locally with a laser. Shorty, wherever the laser is focused, the ingredients in the vat will polymerize / cross-link and will turn into an insoluble solid. Prof. Bill Hammack (engineerguy) made arguably one of the best videos on 3D printing, especially on DLP stereolithography:

How does 2PP deliver a high-resolution 3D printing?

In a macroscale stereolithography 3D printer as the one in the video above, a UV laser is used as the light source. The process is a single photon absorption: photopolymer is cured (solidified) if a single photon is absorbed by each initiator. The probability of the initiator molecule to absorb one photon is pretty high, meaning that polymerization would occur not only at the exact point at which the UV laser is focused but also around that point, where the laser intensity is lower. This undesired polymerization out of focus decreases the printing resolution.

Sub-micron 2PP 3D printing, in contrast, uses a laser in the visible range. Individual photons in visible laser have less energy than those in the UV laser. In order for an initiator to be activated, it has to absorb two photons, nearly simultaneously. For quantum reasons the probability of two-photon absorption is so low that it only takes place where the laser is focused (due to the tremendous amount of photons in a very small volume). Obviously if no polymerization takes place out of focus, printing resolution increases. The image below was taken from Microlight, a French manufacturer of 2PP 3D printers. It shows the activated areas in case of single-photon and two-photon absorption. 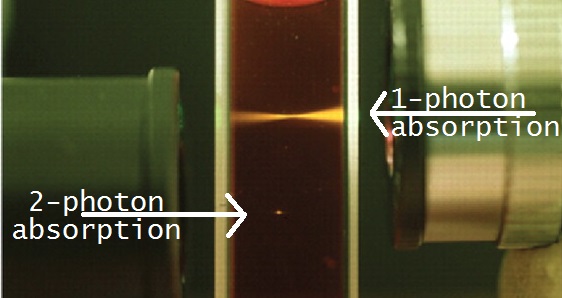 I really hope this short post makes 2PP sub-micron 3D printing a bit clearer. As a nanoscientist, I am sure its real rise is still to come.

Disclaimer: This is a personal blog. I write about things that I find exciting and think are worth sharing. The content was not influenced by advertising or sponsorship. There may be other great products from other companies that I am not aware of (actually I would appreciate if you could write to me if you know any).

This work is licensed under a Creative Commons Attribution-NonCommercial 4.0 International License.